An editorial from the Sunday Age:

On Tuesday, the Australian Bureau of Statistics will begin mailing out the postal survey on same-sex marriage.

Some behind the no campaign have conflated a yes vote with all manner of societal decay. It will impact negatively on the nation, the family, children, religion, freedom of speech and businesses.

The Sunday Age refutes these arguments and urges Australians to vote yes.

First and foremost, yes, because at its heart, denying consenting adults the right to marry based on their gender and sexuality is discrimination. Equality under the law is – and always should be – the bedrock of a democracy.

Yes, because we should strengthen families, the building block of society. Opening the doors to marriage equality will lead to greater social cohesion, not less.

Yes, because we should be thinking about the children. Allowing same-sex couples to marry – to participate in this most traditional of institutions – will further erode ingrained homophobia and help the coming generations of LGBTI youth.
Advertisement

Yes, because now more than four-in-10 LGBTI young Australians have thought about self-harm or suicide, primarily as a result of homophobic abuse.

Yes, because kids should experience the joy of watching their same-sex parents or relatives finally express their vows – if they wish – and legally marry before friends and family.

Yes, because where you pray and to whom will not be affected by gay couples marrying.

Yes, because same-sex couples should never have to prove their love at the side of a hospital bed in order to hold the hand of their ailing partner.

Yes, because older LGBTI Australians who move into retirement villages or nursing homes should never feel they must hide their sexuality once again.

Yes, because “political correctness” is a meaningless red herring.

Yes, because same-sex marriage has already been legalised in 23 nations – without heterosexual couples or families being affected, or shunned. It did result in a whole lot of gay weddings.

Yes, because of the sheer, simple joy of it all.

Yes, for all the celebrants and the bakers and the florists and the caterers whose businesses will flourish from the influx of the pink dollar, should they choose to accept it.

Yes, for all the DJs and cover bands who can’t wait to play at a queer wedding, because there will be love and joy and endless dancing. And glitter.

Yes, because even though you don’t have to vote, you need to make the effort to be counted. Australians have been asked to vote on the rights of a minority. To judge whether same-sex partnerships are worthy – or equal. It’s time now to support our LGBTI community – they are our brothers, sisters, sons and daughters, our aunts and uncles, nieces, nephews and friends.

Stand by them. Vote.

And, yes, because ultimately, love is love.

Watch the YES campaign’s new ad for marriage equality ahead of the upcoming/referendum/plebiscite/survey.

I think the other guy is Dan Goodfellow.

Tom Daley is married to Dustin Lance Black.  Good on him! 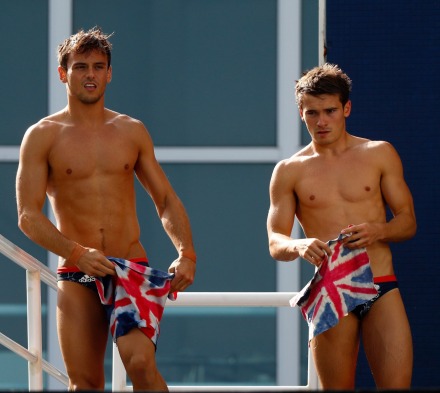 The first anti gay marriage ad has aired on television.  It has been mercilessly mocked since then.

Image via Pauline Pantsdown whose name and drag persona sends up a right-wing politician, Pauline Hanson.

The equal marriage “referendum/plebiscite/survey” got off to a bad start … for the trogs and gay haters, that is.

100,000 mostly young people registered for the first time to vote.  Young people are overwhelmingly in favour of marriage equality.   This makes it more likely that YES vote will succeed.  The religious conservatives thought they’d have it their own way.  It seems not. Ozzies voting at an election 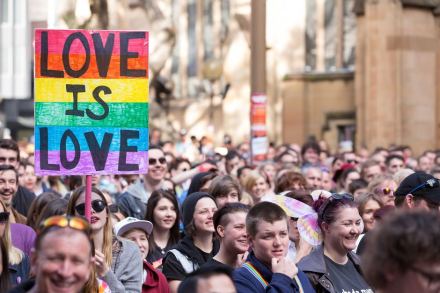 The conservative Liberal-National coalition in Australia is doing its very best to delay marriage equality as long as possible. The latest little trick is to have a postal vote (run  by the Australian Bureau of Statistics.  Yes, really)  After that there will still be a vote in Parliament, and many conservative MPs have said that no matter the outcome of the popular vote, they will still vote against it.  The Labor Party on the other hand has promised that if it wins the next election it will pass a marriage equality bill in its first 100 days.

Naturally, the churches have produced the usual lies in argument against gay marriage: equal marriage is against God; will remove religious freedoms; blahty blah.  In fact, all the churches/temples/mosques etc, and all their priests, are exempt from the proposed law.  They will not have to marry any naughty gays or lesbians if they don’t want to.  Civil marriage celebrants will also be exempt from celebrating a gay marriage if they declare in advance that they have “religious” objections to gay marriage.

The Australian Christian Lobby claims that:

I can’t resist this quote from Epicurus in this context.

I intend to vote YES needless to say, and to encourage everyone I know to vote YES, and hope there is a landslide victory (70% of the population is in favour of marriage equality) and that all the haters and troglodytes are buried under the landslide.

Christine Milne, leader of the Australian Green Party, started fighting for gay rights when her son was just four.  And then it turned out her son was gay.  It’s really nice when someone supports us even when they themselves are straight and they have no gay members in their family.  Read a moving interview with her here. 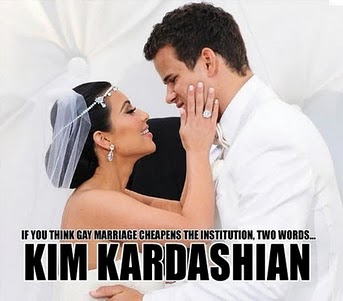